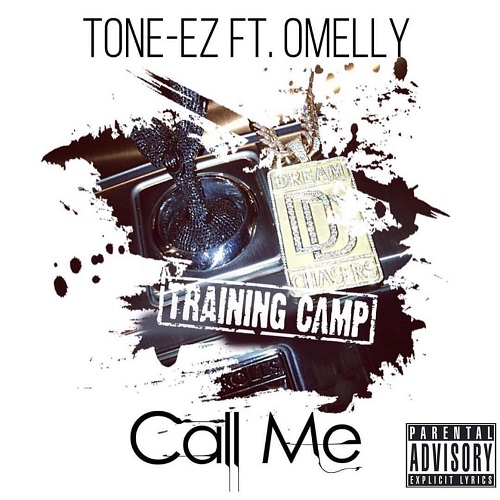 DOVER, DE – When Tone EZ was a young boy, he used to go to concerts with his step-father. Because he was so little, he could never see past the crowd to the artists on stage, so his step-father would always him up so he could see. It was in those special moments with his step-father that he knew that he wanted to be a musician. And today, Tone EZ is realizing that dream by becoming one of the hottest new hip-hop artists in the country.

His latest single – “Call Me,” featuring Omelly and the Dream Chasers – has just been released and is already getting rave reviews. The song is about the having a good time with friends, and how much joy you feel when someone calls you to go do something fun.

“If they have a hotel, or they want to spend money at the bar, they gonna’ call me,” Tone EZ said. “It’s kind of a call to action to go have fun. It’s a song with a lot of energy and a good beat.”

Tone EZ said the single is a good representation of the kind of music he makes, and that he hopes his music will inspire people to never stop chasing their dreams and their goals. In fact, his label is a reflection of the life motto that exemplifies this idea. “Training Camp” is a label that he says represents the “hard work you have to put in before you make it in any professional.”

“Just like a training camp for sports, I use that ideology for my music,” he said. “If you work hard and train hard, you can make it in anything you do in life. When we came up with this idea, me and my friends were just sitting there trying to think of something to call ourselves that would reflect this idea. My friend said, ‘I’m thinking of a boxer – when you’re a boxer you’ve got to get in the ring to fight but you’ve also got people around you, like the cut man or the trainer. What do you call those people?’ And that’s when I said, ‘You just really call them the training camp.’ And that’s how that name was born.”

Over the past 15 years, Tone EZ has been perfecting his art so that today, when it comes to painting pictures through lyrics or giving meaningful purpose to songs, he consciously gives his fans timeless and tangible music to hold on to. He credits his love of music as being a way to take himself out of the madness around him at times – having grown up in the streets of St. Louis.

“I would get lost in the music,” he said when referring to the stress of street life. “I know where I come from, but I’ve always known where I wanted to go.”

He credits artists such as Tupac, Jay Z, OutKast and TI for helping inspire him. Using those artists as a template, he said he began to master his sound while learning how to tell stories and share truth through his lyrics.

“I vibe out to the beat for about 10 or 15 minutes,” he said. “I let the music speak to me. Whatever it’s telling me to say, I just kind of flow with whatever is on my mind at the time. When I listen to an instrumental on the track, I can almost feel where I need to go.”

He said his new single “Call Me” is a great representation of his journey as a musician and his unique sound. It’s available for purchase on all digital media download sites. Fans who want to find out more about Tone EZ, or who are interested in seeing him live, can follow him on social media on Twitter, Snapchat and Instagram under the handle @toneeztc.